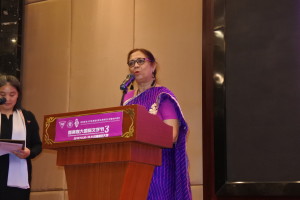 Long before that in The Rig-Veda, the seers says- I don’t know, who I am, and where did I came from, I carry this burden on my head and roam  around.

When the Man think, he thinks for everyone, his surrounding, his society, his nature and all living or nonliving things,

But when the Man starts thinking only for himself, for his own comfort, for his own belief, without showing respect to others, the identity of the Man  and usefulness of his existence  in the this earth gets limited.

Unfortunately, we live in the time, when the man is thinking a lot, but not for nature, earth, or Universe, but he is thinking for his own benefits, his own believes and of his own needs, and many things around him.

We are living in the time, when the boundaries or human hearts are getting shrinken,

Our believes are struggling with others believes,

This happens when we forget the oldest human language, which is called poetry. Poetry was the language, which introduce the man to nature, which give strength to the Man to talk to creator of the universe and which give him power to create his own deities, beliefs and ideologies.

This is the power, which introduce man to the scientific world. The Omar Khayyam was a good mathematician and astronomer, because he was good poet. Indian astronomer Bhaskaracharya –II could write the best mathematic book it was in poetry.

In the journey of the Man, poetry remained his language all the time. It gave him to not only survive, but also to think better for the universe.

In the recent years, we have isolated poetry, and limited its power.

The poetry is the language of all knowledge, which says “Keep me not in the Darkness but lead me towards the Light

Keep me not in the Death (due to the bondage of the Mortal World), but lead me towards the Immortality.

If we want to survive in this beautiful earth, we must love our sun moon and whole universe, we must learn again our oldest language that is poetry. Which gave us light of knowledge.

I congratulate the Unnan Natural University to organize the International poetry festival,

To invite us from different places, and introduced to beautiful young people, who in future will take this world together for better living.

I am sure, many young poetic voice rise against the all darkness of the world, and light of knowledge

I thank you all from we all poets, who came here to be part of this Yaaga( means holy offering)